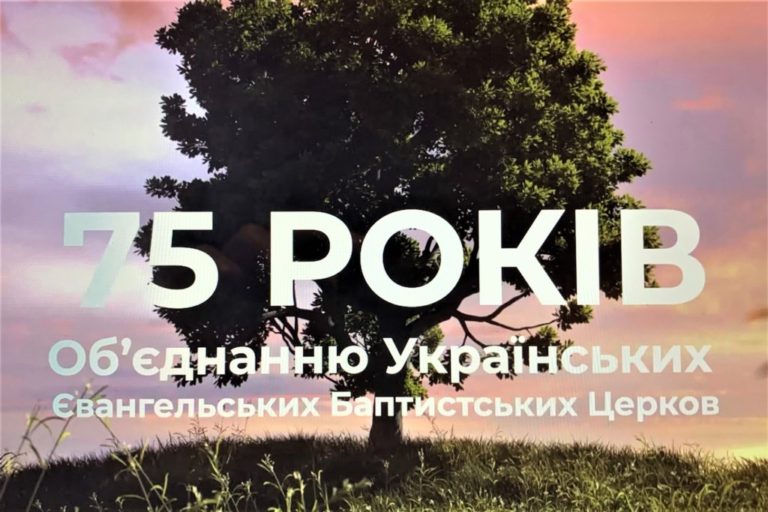 Because of restrictions related to Covid-19 last year, the annual conference and celebration of the 75th anniversary of our association were postponed to 2021.

By the grace of God, on Friday, September 3, 2021, the 75th Jubilee Congress began its activity with a working meeting of an enlarged committee chaired by Pastor Roman Kapran, president of the UEBC in the United States, who greeted those present and offered a prayer. This meeting took place in the prayer house of the Slavic Baptist Church in the city of Stevens, Pennsylvania, where the pastor is Andrii Dribnokhod.

Pastors, deacons, and ministers of many churches had the opportunity to hear the reports of the head of the association, Rev. Kapran; the leader of women’s ministries, Svitlana Khrystenko; and the leader of youth ministries, Denis Sichkar. In addition, the audit and resolution commissions were elected. The meeting ended with a prayer followed by fraternal fellowship over a delicious dinner prepared by the sisters of the local church. After this, a group photo was taken for memories.

The official opening of the 75th jubilee conference of the Ukrainian Evangelical Baptist Convention in the USA began at 7 p.m. on September 3 in the Ephrata Christian Fellowship auditorium. The service was held in an atmosphere of worship and thanksgiving to the Lord. The participants and guests had the opportunity to worship and glorify God together with the brothers and sisters of the church in Stevens, which hosted this conference. Participants listened to the main sermon from the Word of God, which was delivered by Pastor Mykola Romanyuk from Ukraine. They also heard greetings from various guests.

The morning of September 4 began with a prayer breakfast, which left unforgettable memories of fellowship amid prayers and the word of God. At 10 a.m. in the facilities of the Ephrata Business Center, many people gathered for seminars that covered the main theme of the convention: “Let’s build up the church.” Two seminars were held simultaneously; in total, there were nine.

The main speakers at the seminars were local pastors and ministers, as well as guests. Among them: Pastor Mykola Romanyuk from the city of Irpin, Ukraine, who covered the topics “What church structure is best for church growth”; and “How to find your place in the church and be fruitful”; Pastor Ivan Mileyev (speaking in Russian) covered the topic “The Immigrant Church. Its Present and Future”; Pastor Mike Golay (from the mission Behold Israel) presented seminars in English “Where we are in the prophetic timeline” and “Ezekiel’s vision being fulfilled today.“ Sister Lesya Vodolazhska conducted a seminar for women titled: “Look and live. Daily application of the Gospel in the life of a Christian lady.”

In addition, seminars were presented by pastors in our association: Rev. Anatoly Moshkovsky, (a past president of the UEBC) – “Creating a strong team of ministers”; Rev. Yuriy Kovch (from House of Gospel in Richland, New Jersey) with his panel – “Brotherhood in the contemporary church”; and Pastor Ioan Ustenko and his team (from Regeneration Church in Fairless Hills, Pennsylvania) – “Honesty about the church.” They all covered well their topics related to building up the church.

Deserving a special mention is the hospitality of the Stevens church in hosting the conference. At the seminars, attendees had a rich table of spiritual food, and during lunch they socialized and consumed delicious dishes prepared by the sisters of the Stevens church. The youth of the church organized a program for children while parents attended seminars. May the Lord reward all those who served in the preparation and implementation of the conference.

Saturday’s events culminated with a youth service, in which youth of the association glorified and magnified our God with wonderful musical numbers, including superb singing by the youth choir under the direction of Diana Gavlishin. An inspiring sermon was delivered by Pastor Ivan Skachko from Cornerstone Church in Parma, Ohio.

The last day of the 75th conference began on Sunday, September 5, at 11 a.m. at Lancaster Bible College with a festive gathering dedicated to the 75th anniversary of the association and attended by upwards of 1,000 people.

Pastor Anatoly Moshkovsky, president of the UEBC in 2011-2018, opened the service with a prayer addressed to the Lord. The entire congregation joined in praising God together with the combined choir under the direction of conductor Ivan Velenchuk (from Grace Ukrainian Baptist Church in Warminster, Pennsylvania).

The performance of the biblical Psalms transported listeners into an atmosphere of sublime worship of God as Israel did, singing Psalms. It should be noted that Pastor Sergio Sauchuk and conductor Ivan Velenchuk (both from Grace Ukrainian Baptist Church) described a unique and new songbook of biblical Psalms in the Ukrainian language. For the first time, all 150 Psalms were set to music for choral and congregational singing in church. Brothers Sauchuk and Velenchuk talked about the origin of the idea of writing music for the Psalms and how the Lord helped to carry out this plan during four years. Performances of these Psalms can be seen on YouTube.

Two sermons about edifying the church were heard at this joyous service. The first was delivered by Pastor Roman Kapran, president of the church association. The main sermon from the word of God was preached by Pastor Mykola Romanyuk, who urged the listeners to practically build up Christ’s church. (See video attachment below.)

On the occasion of the 75th anniversary of the Ukrainian Evangelical Baptist Convention, a video was shown that depicted its history – from the founding of the Ukrainian Missionary and Bible Society in 1946 to its transformation into an association of churches in 1953, its development and the path to the present. That video clip of 7.5 minutes may be found on YouTube.

We have a tradition at conferences to give scholarships from the association to young people who are successful students and active members of their church. This time Pastor Viktor Kuzmenko, vice president of domestic missions for the UEBC, presented stipends to six students from three churches: Regeneration Church in Fairless Hills, Pennsylvania; House of the Gospel in Richland, New Jersey; and the First Ukrainian Evangelical Baptist Church of Philadelphia.

Pastor Leonid Bliznyuk, the head of the audit commission, read the financial report and thanked Brother Alex Kolesnik for his conscientious work as the association’s treasurer. A resolution adopted by the 75th conference was read by the chairman of the resolutions committee, Pastor Viktor Shchypailo, from the Ukrainian Baptist Church in Lancaster, Pennsylvania. In addition, a joint resolution was endorsed by four brotherly Baptist associations (Ukrainian Evangelical Baptist Convention in the USA; Western Ukrainian Evangelical Baptist Convention in the USA; Pacific Coast Slavic Baptist Association; Russian-Ukrainian Evangelical Baptist Union) about the family and gender. This resolution emphasizes the practical importance of the biblical interpretation of the family, which was established by the Lord, and the male and female gender in the light of current gender politics. These two resolutions are available on the association’s website (www.UkrBaptist.org).

The 75th convention ended with a prayer by Pastor Avdiy Chripczuk from the Ukrainian Baptist Church in North Port, Florida, who was president of the UEBC in 2008-2011.

Afterward, all the guests and delegates departed for their homes full of inspiration, joy and anticipation of future meetings with each other.

PrevPrevAn Invitation to the Convention
NextTimeline of UBC of the U.S.Next 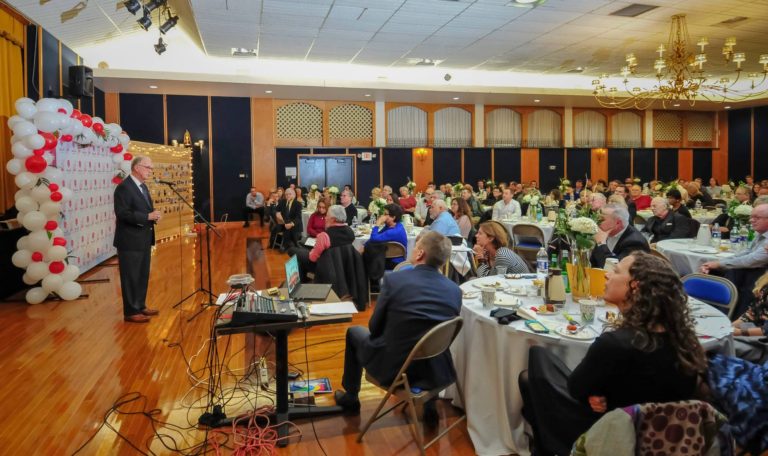 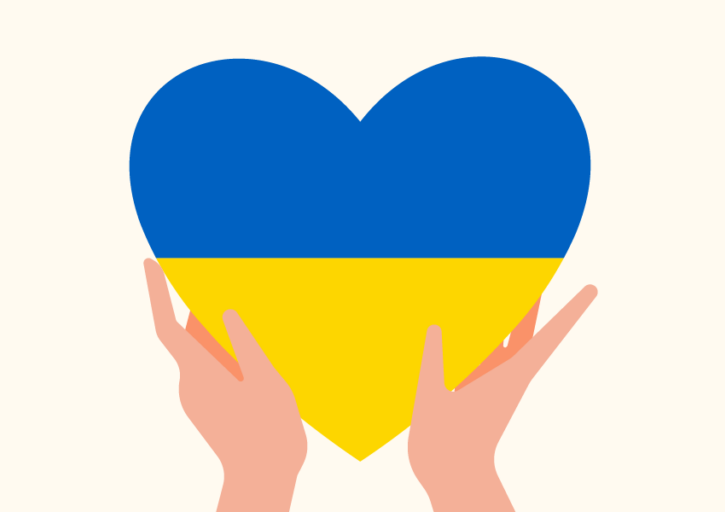 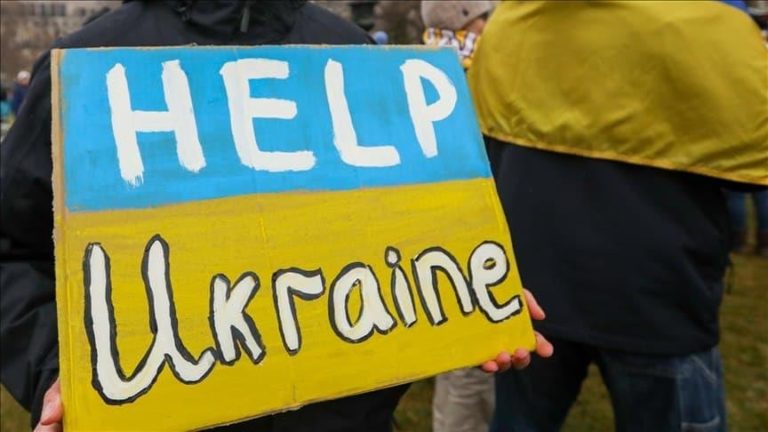 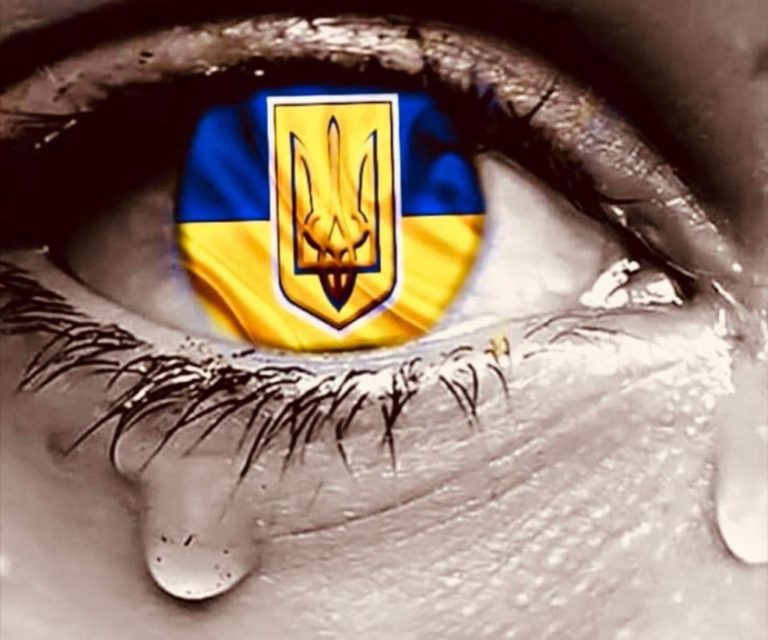 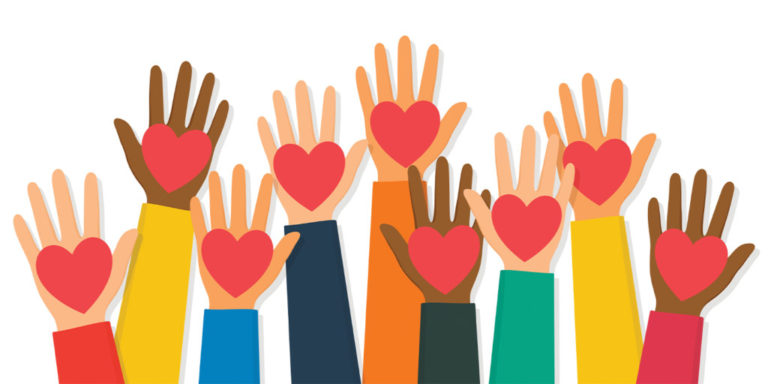 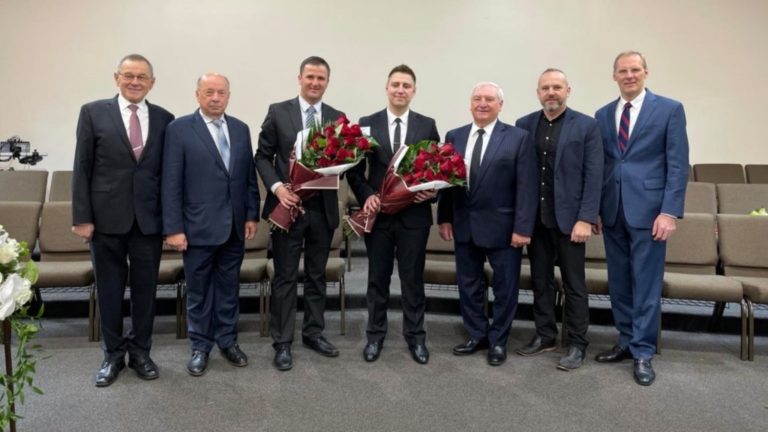 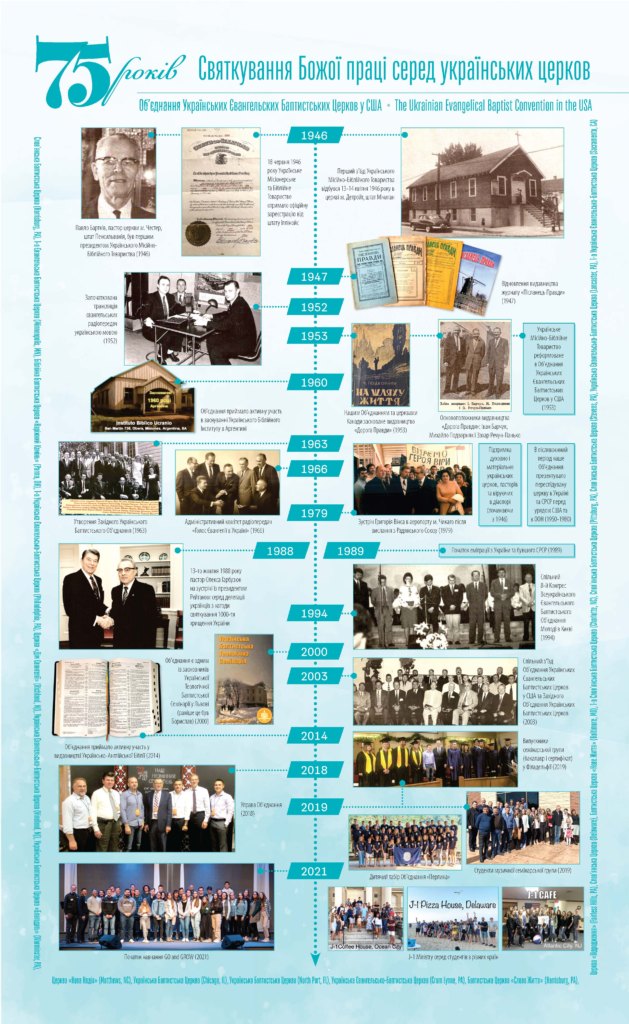